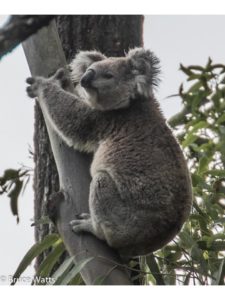 A koala was spotted by a local birdwatching club on the Tahlee property in March!

A koala research program has been established by Tim Currie, a final year Environmental Science student from Deakin University. Please pray for this program to continue and for more Koalas to be discovered.

Bird surveys have also continued and over 100 surveys have been recorded on site. From these surveys over 150 different bird species have been sighted including 11 birds listed as vulnerable or higher on state or federal endangered species lists.

A weed eradication program has opened up space near the foreshore, and a restoration project has begun to re-establish native vegetation in this area to attract native fauna, particularly koalas and native birds.