Collaboration on the Capernwray Environmental Plan

Capernwray’s property is situated at Burradoo in the Southern Highlands of NSW, where large areas of the higher-rainfall and most fertile regions of Australia have been developed for agriculture, providing food and fibre for humans but consequent loss of biodiversity. The Capernwray property adjoins the Wingecarribee River and state-managed Cecil Hoskins Nature Reserve wetland, at which over 90 species of birds have been recorded.

A Rocha seeks to demonstrate that conservation and some restoration is possible.

On-ground works have thus far focused on the restoration of woodland habitat and the conservation of an endangered tree species.

The re-establishment of riparian vegetation and habitat associated with the Wingecarribee River commenced with tree planting undertaken by Capernwray students in October 2016 (see photos below). A gradual extension of this initial plantation is planned to create a wildlife corridor linking to the adjoining nature reserve.

The flats of the Wingecarribee River adjoining the Capernwray property was the site of the first European settlement in the NSW Southern Highlands, in 1817. Governor Lachlan Macquarie described the country as ‘really beautiful, being fit for both cultivation and grazing’. Consequently, clearing for agricultural development began two hundred years ago. The pre-European vegetation at the Capernwray property was the Southern Highlands Shale Forest and Woodland, now listed as a threatened ecological community at both State and National levels. More information can be found here.

The only native tree to survive early clearing at Capernwray is Paddy’s River Box Eucalyptus macarthurii. Once widespread within woodlands on fertile soils in the area, the species is now listed as threatened at both State and National levels. More information about Paddy’s River Box can be found here. 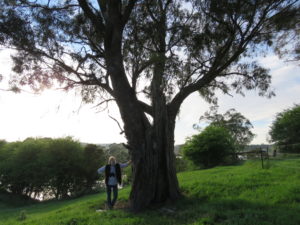 Future revegetation projects at Capernwray will utilize characteristic tree and shrub species from Southern Highlands Shale Forest and Woodland, while existing Paddy’s River Box trees are being conserved and managed to facilitate natural regeneration. A Rocha Australia members will continue to contribute technical and funding advice and labour.

Capernwray operates a Bible school and conference centre on the property. Several events have been hosted here in conjunction with A Rocha Australia and its members, including conferences on Caring for the Garden in a Fallen World: A Christian Perspective on Nature Conservation and lectures for students and the general public, a seminar on threatened species in the Southern Highlands co-hosted with the NSW National Parks and Wildlife Service, and a national conference at which A Rocha co-founders Peter and Miranda Harris were guest speakers.

Caring for the Garden

Project in partnership with